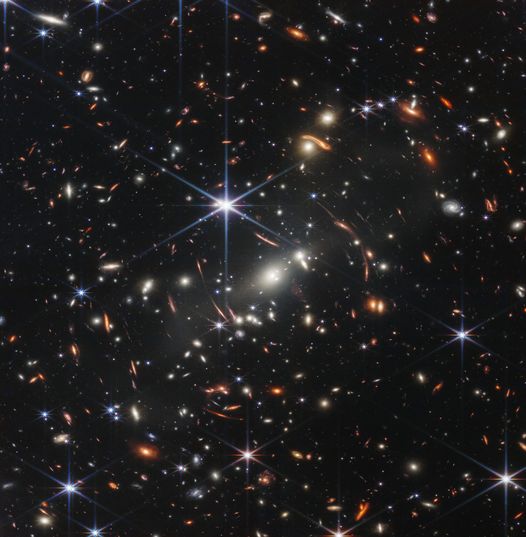 Posted by: NASA’s James Webb Space Telescope
Sneak a peek at the deepest and sharpest infrared image of the early universe ever taken — all in a day’s work for the Webb telescope. (Literally! Webb was able to capture this image in less than one day, while similar deep field images from Hubble can take multiple weeks.)

This is Webb’s first image released as we begin to #UnfoldTheUniverse: nasa.gov/webbfirstimages/

If you held a grain of sand up to the sky at arm’s length, that tiny speck is the size of Webb’s view in this image. Imagine — galaxies galore within a grain, including light from galaxies that traveled billions of years to us! Why do some of the galaxies in this image appear bent? The combined mass of this galaxy cluster acts as a “gravitational lens,” bending light rays from more distant galaxies behind it, magnifying them.

This image isn’t the farthest back we’ve ever observed. Non-infrared missions like COBE and WMAP saw the universe much closer to the Big Bang (about 380,000 years after), when there was only microwave background radiation, but no stars or galaxies yet. Webb sees a few hundred million years after the Big Bang.