Welcome to the Athena Community Astronomy Club, Prince Edward Island's only astronomy club.
Come and explore the universe with us! 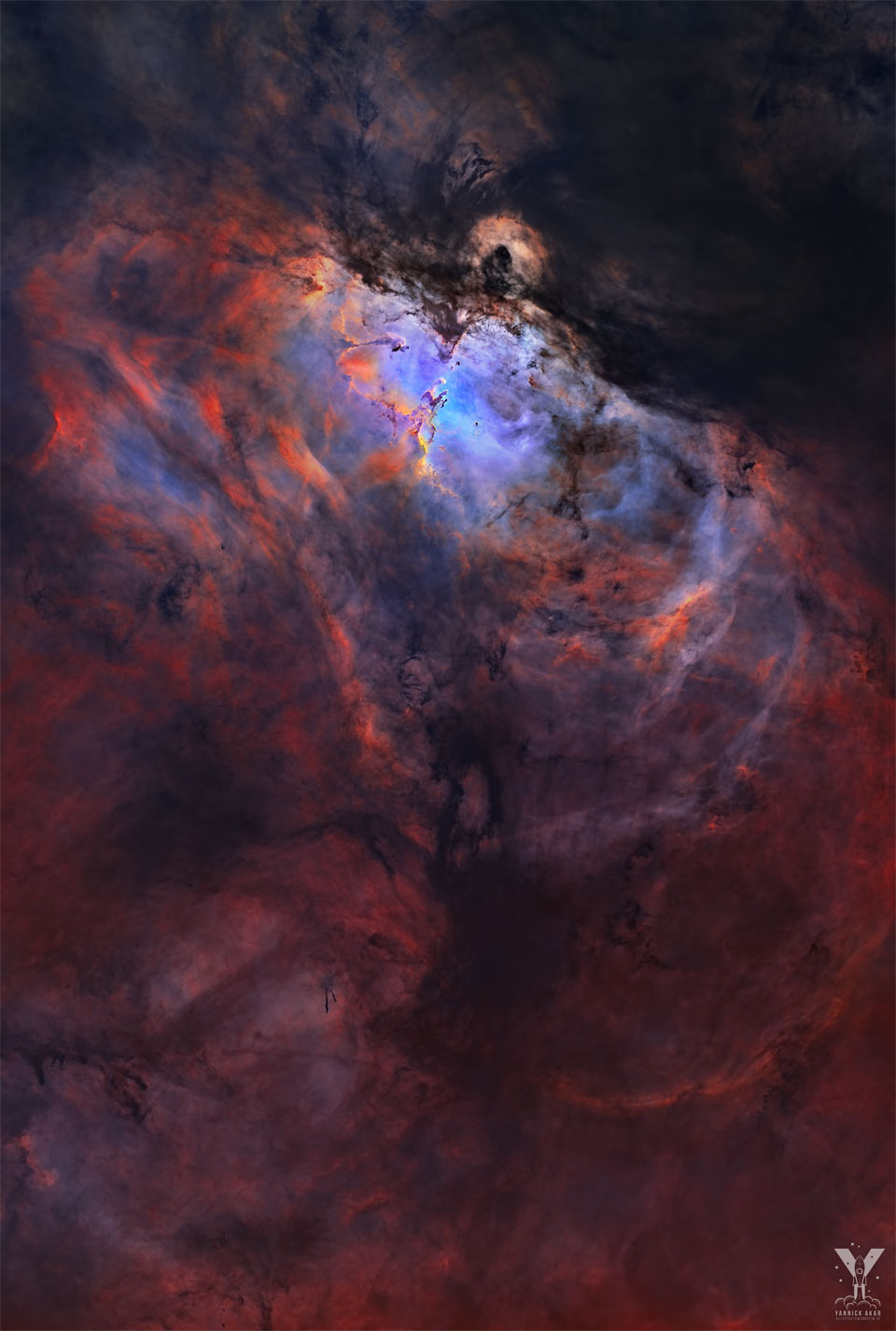 The whole thing looks like an eagle. A closer look at the Eagle Nebula's center, however, shows the bright region is actually a window into the center of a larger dark shell of dust. Through this window, a brightly-lit workshop appears where a whole open cluster of stars is being formed. In this cavity tall pillars and round globules of dark dust and cold molecular gas remain where stars are still forming. Paradoxically, it is perhaps easier to appreciate this impressive factory of star formation by seeing it without its stars -- which have been digitally removed in the featured image. The Eagle emission nebula, tagged M16, lies about 6500 light years away, spans about 20 light-years, and is visible with binoculars toward the constellation of the Serpent (Serpens). Creating this picture involved over 22 hours of imaging and combining colors emitted specifically by hydrogen (red), and oxygen (blue).
© apod.nasa.gov

Are we the only ones?Et, phone us, scare us, just don't serve us (hey, Twilight Zone, March 2, 1962, to unnerstan that one).But, seriously folks; I heard, today, about a Nobel Prize - for medicine, I think - awarded for figuring out the DNA sequencing in 40,000-year-old, give-or-take a few days, hominid bones, and also indicating (proving?) that Neanderthals interbred with Homo sapiens - us - when the two populations interacted, from about 800,000 years ago. Apparently, most of us - Africans excepted because Neanderthals never, at least under current evidence, inhabited that continent - carry about 1-2% Neanderthal DNA. Some individuals may exhibit traits that more openly express those genes; hey, that's just how DNA plays.It has often been wondered - in this case, I will accept the idea of "since time immemorial" - if we. Homo sapiens, are alone in the universe. Now, shows like Star Trek and Star wars, among other presentations, have conjured up extra-terrestrial beings, but none have ever been verifiably proven - that we know of, for conspiracy theory-lovers out there; not saying you're wrong, just demanding that the evidence be presented.I enjoy Star Trek more than Star Wars, now because the idea of "intelligence" is more questioned (also on last weekend's Quirks and Quarks, I think). Star Trek had an episode of a burrowing rock creature trying to protect its offspring from colonizing miners, and another episode had nearly microscopic, sentient beings, that lived in the top, moist centimeters of a planet's surface, getting angry with the Enterprise for invading its space, no pun intended.We are also reconsidering the sentient nature of organic existence - all of it - on Earth.We may not be "alone", however one wants to qualify that, but it is entirely possible that we are unique in this universe, not superior, to all, or anything, just who and what we happen to be.Let's just hope that there are none, out there, who want "To Serve Man". ... See MoreSee Less

Can't catch a break!With a hurrycane incoming, and some forecasts positing a looooong passage - no hurry for this one, apparently - we are going to postpone to 02 October our last-Sunday-of-the-month-live-meets at Wilmot Centre.Stay safe, all, and we'll meet on t'other side. ... See MoreSee Less

The September equinox is around September 22-24. On this day, the Sun crosses the equator from north to south.

From galaxies, nebulas, our sun and more, this year's winners in the Royal Observatory Greenwich’s Astronomy Photographer of the Year competition are jaw-dropping.

Most famous for the Drake Equation, which predicts the amount of extra-terrestrial life in the universe. (Spoiler Alert! It's a lot!) ... See MoreSee Less

Frank Drake, Who Led Search for Life on Other Planets, Dies at 92

He was convinced that human beings would eventually connect with extraterrestrials, and he inspired others to share that belief.

Prince Edward Island is in the path of a total solar eclipse in April of 2024 — and astronomers are urging skygazers to buy their solar viewers before supplies become scarce.